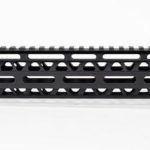 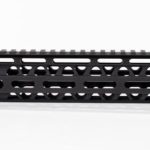 The 12″ slim m-lok light handguard is made with an easy to install clamp on system. The 12″ handguard slips over the barrel nut and clamps on with two screws. The M lok 12 inch rail assembly is made from T6 Aluminum with a proprietary steel barrel nut .  The handguard fits up tight against the upper receiver allowing for monolithic top rail. The M-lok rail is heavy duty as well as made in america.